The Poets Are Gathering

“There are incantations and supplications to be found here. Also: elegies and headlines, howls and mantras, reveries and outbursts. They instruct and affirm. They urge you to dance while offering road maps to reflection. They rouse you from deep slumber and offer solace for your worst nightmares.”  ~ GENE SEYMOUR (Noted Cultural Critic, from the liner notes)

“The Poets Are Gathering” is the third in a series of acclaimed recordings from saxophonist/composer Benjamin Boone that integrate the music and poems from some of America’s leading jazz musicians and Poet Laureates, Guggenheim fellows and Pulitzer Prize winners. Where “The Poetry of Jazz” volumes offered the voice of the late U.S. Poet Laureate Philip Levine, here, notable contributors include Tyehimba Jess,  Juan Felipe

Herrera, Patricia Smith, T.R. Hummer, and Edward Hirsch, along with pianist Kenny Werner, guitarist Ben Monder and drummer Ari Hoenig, among many others. This recording possesses a visceral, in-the-moment force as the poetry responds to the roiling, insurgent energies against racism and other societal ills. The themes of immigration, racism, homelessness, poverty, abuse, protests, and war can overwhelm and distress, but through the voices of some of the world’s great literary minds there are clues to be found to absorb the blows, summon the spirits, engage the moment and as Tyehimba Jess suggests, “murder the silence” that threatens to immobile us, to keep us away from the reasons to commit, to deal, to hope – and, above all, to imagine.

“Boone knows where the thing called poetry lives, an ocelot among the waters, a sky-shaped Rain God that flares down upon us. He does this with a myriad of instruments, with human breath chiseling and burning through brass and string, reeds and skin and hands and resin.” ~U.S. POET LAUREATE JUAN FELIPE HERRERA 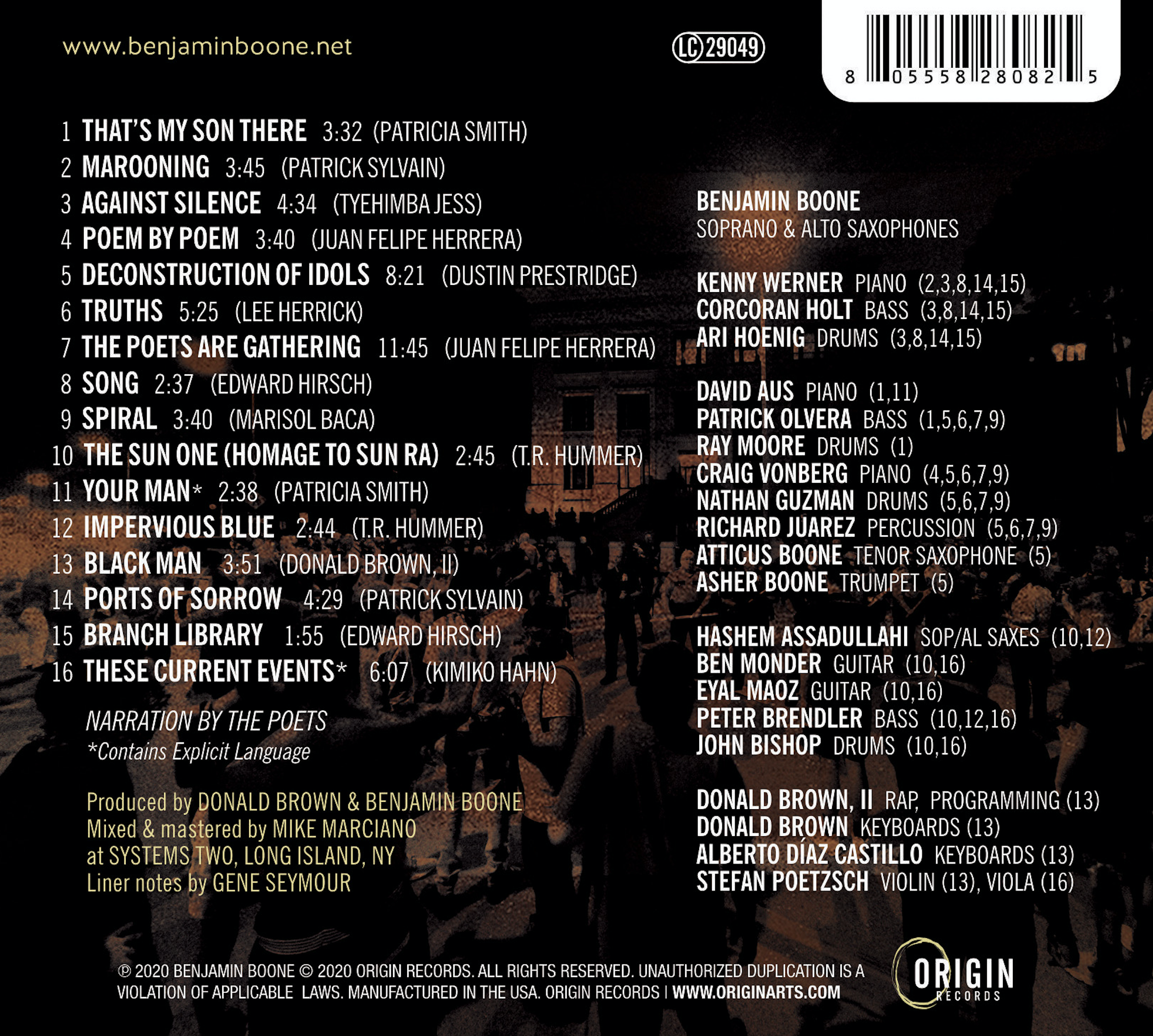 MORE … Jazz and poetry have been inextricably linked since the Harlem Renaissance, a creatively potent pairing that’s in the midst of a 21st-century resurgence. No one on the contemporary jazz scene has done more to elevate the marriage uniting these two supremely expressive art forms than saxophonist/composer Benjamin Boone, whose new album The Poets Are Gathering encompasses nearly a dozen writers exploring themes that thrum with the urgency of a protest march. The politically charged project expands on Boone’s critically hailed collaboration with the late Pulitzer Prize-winning poet Philip Levine on 2018’s The Poetry of Jazz and 2019’s The Poetry of Jazz Volume Two, albums that earned ecstatic notices from both jazz and literary publications. Rather than focusing on the work of one artist, The Poets Are Gathering brings together a disparate cast of writers and players, including revered pianist Kenny Werner, guitarist Ben Monder, bassist Corcoran Holt, and drummer Ari Hoenig.

A longtime professor of music at California State University, Fresno, Boone credits former United States Poet Laureate Juan Felipe Herrera with inspiring him to bring a wide array of voices into the project. After working closely with Herrera on four choir settings of his poems for an hour-long celebration of Herrera at the Library of Congress, Boone was determined to record with his Fresno State faculty colleague. But the more time they spent together the more Boone realized that the fraught climate surrounding the 2016 presidential election required a thick harmony of voices. “Juan had a hyper-inclusive and empowering project as U.S. Poet Laureate, where schoolkids, community members, everyone was invited to contribute lines to an epic poem called La Casa de Colores (House of Colors),” says Boone. “His message is that everybody is a poet, everyone has something valuable to offer, everyone’s voice is important and deserves to be heard—especially those who traditionally haven’t been heard. I was touched and inspired.”

Panoramic in scope and kaleidoscopic in vision, The Poets Are Gathering contains multitudes. Bursting with vivid imagery, exuberant emotions, exacting diagnoses, sinuous melodies, and thoughtful interplay, the album opens with a gut punch by Patricia Smith. A four-time National Poetry Slam champion, she delivers a devastating performance of “That’s My Son There,” a piece that builds to an excoriating crescendo enhanced by Boone’s darting alto sax. Later in the album, she evokes a very different mood accompanied only by pianist David Aus on “Your Man,” her intimate, bluesy ode to bruised romance.

Haitian-American poet Patrick Sylvain conjures the dangers and costs of leaving home for the immigrant on “Marooning,” a meditative recitation buoyed by Boone’s lithe soprano sax and Kenny Werner’s gentle piano counterpoint. Sylvain captures another emotional current that carries those who leave their friends, family, and homeland behind on “Ports of Sorrow,” a poem written in the key of rueful nostalgia.

Many of the gathered poets refer to the troubled history that continues to roil the United States, like Pulitzer Prize-winning Tyehimba Jess, who embraces the poet’s imperative by “murdering silence” with a litany of Black people unjustly killed on “Against Silence.” Forceful and righteous, his message resounds in Werner’s crashing chords and Boone’s alto sax squeals, as Corcoran Holt and Ari Hoenig bob and weave amidst the poem’s tidal surge.

T.R. Hummer delivers a cosmic callout to pianist, composer, and Afro-futurist visionary Sun Ra with “The Sun One (Homage to Sun Ra),” a prolific poet himself who often wrote about the need for Black people to inhabit other planets. It’s a brief interstellar flight powered by a full-tilt sextet with saxophonists Boone and Hashem Assadullahi (a rising force on the New York scene). Juan Felipe Herrera’s two contributions offer very different takes on the power of the verse and versifier. Accompanied only by Craig VonBerg’s elegiac piano work, he draws from an endless well of sadness on “Poem by Poem,” which mourns the nine worshipers murdered by a white supremacist in Charleston. With the album’s title track and centerpiece “The Poets Are Gathering,” Herrera reveals the full scope of his vision. He summons his colleagues from around the world with a roll call set to an increasingly intense march-time beat: Vietnam, Spain, Finland, Nicaragua, Argentina, Germany, Chile, and McAllen, Texas, where “the poets are staring down La Migra!” City by city, speaking truth and insisting on recognition, the global communion of poets answers Herrera’s call.

The album’s far-flung vision isn’t surprising considering that the recording process was interrupted by Boone’s year-long music-rich Fulbright Fellowship in Ghana (an experience he documented with the Ghana Jazz Collective on their 2020 album Joy). The culture shock he experienced upon his return to Fresno was magnified by the unmistakable political and societal tensions he saw in the country, and he made sure the album reflected that reality. “I am humbled and honored to be able to collaborate with such marvelous poets, who so eloquently speak the truth about this country and of existence,” says Boone. “I am touched by their profound messages.”

The messages are greatly enhanced by the music, much of which was sketched out briefly and captured in the studio on first takes. As on his two Phillip Levine albums, Boone worked closely with piano great Donald Brown, who produced The Poets Are Gathering. They reconnected in New York City when Brown was participating with fellow Jazz Messenger alumni in a centennial celebration of drum legend Art Blakey. Brown played a key role in assembling the players, most importantly connecting Boone with Kenny Werner. The recording process was loose and “Donald played an essential role in the sessions,” Boone says, “especially when we came up with a concept on the spot after chatting with the poet and hearing what they wanted to express. It was a truly collaborative environment with everyone involved.”

Born October 19, 1963 in Statesville, North Carolina, Benjamin Boone grew up in an intellectually stimulating family and could have devoted himself to any number of pursuits. He concentrated on the saxophone and improvising from an early age, but was also interested in composition. “Being the younger brother of four overachieving older brothers, I was always drawn to interdisciplinary projects,” he says.

He studied composition at the University of Tennessee and went on to get a Master of Music degree from Boston University and a Doctorate from the University of South Carolina, studying with heavyweights such as Bernard Rands, Gordon “Dick” Goodwin, Charles Fussell, John A. Lennon, and Jerry Coker. For his doctoral dissertation, Boone delved into the little-studied area of the musical analysis of speech, research cited in Oxford’s New Grove Dictionary of Music and Musicians and the Journal of the Acoustical Society of America. As a Fulbright Senior Specialist Fellow, he conducted musical research in the former Soviet republic of Moldova.

His interest in poetry is a natural outgrowth from his longstanding interest in language, cognition, and music. He traces his fascination with the music of spoken language to a hearing issue “that makes it hard for me to understand words,” he says. “When I hear people speak, I hear it as music. Listening to blues musicians speak, I hear blues lines, and my fascination with spoken language informed this project.”

As a composer, Boone is heralded in both jazz and new music circles. His music has been performed in 35 countries, and appears on some 30 CDs. It’s been featured on film soundtracks, and has been the subject of multiple national broadcasts on National Public Radio. The Poets Are Gathering takes him into new territory as an artist, thematically and stylistically. Rapper Donald Brown II, son of the pianist/producer, contributes a searing indictment set to a slinky groove with “Black Man,” a piece built on lapidary synth lines that wouldn’t be out of place on a Kendrick Lamar album. Created during the shelter-in-place order, it was the last piece recorded for the album.

“We were in Germany, Fresno, and Knoxville,” Boone says. “This was not my normal world—to work remotely, sending tracks back and forth. But I’m happy that we were able to figure out a way to gather together internationally and in unity, to make what we think is a powerful statement.”

Rather than closing on a rousing or triumphant note, Boone leaves the last word for Kimiko Hahn, an innovative artist who is president of the Poetry Society of America. Boone’s ominous, atmospheric score accentuates the tired sadness of “These Current Events,” a poem that evokes the large and small indignities and injustices we all confront in daily life. She makes no great claims for art’s ability to change the world. “I know poetry cannot save / but it fuels the gut that is able,” she intones. With The Poets Are Gathering, Boone and his gathering fuel the struggle for this nation’s soul.   •

There are no reviews yet.

Be the first to review “The Poets Are Gathering” Cancel reply